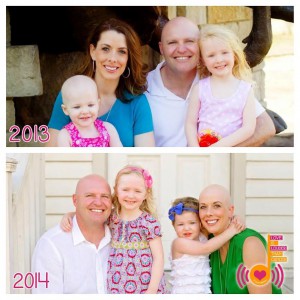 Kelly & Dave Thomas’ youngest daughter, Lainey, was diagnosed with Acute Lymphoblastic Leukemia on August 26, 2013, two weeks before her 2nd birthday. By the grace of God, Lainey’s response to treatment was well received and she is currently in remission. She completed her chemotherapy in October 2015 and is currently cancer FREE!

The Thomas family has worked tirelessly since Lainey’s diagnosis to raise money and awareness for the Leukemia & Lymphoma Society. In April 2014, Kelly ran her first half marathon with LLS’s Team in Training program to honor Lainey’s fight. Just prior to the race, at age 39 and with no prior family history, Kelly was diagnosed with Stage 3 breast cancer. She went on to complete the half marathon, with the knowledge that as soon as she returned home she would begin six rounds of chemotherapy. On September 30, 2014 (also her 40th birthday), Kelly received a double mastectomy which later revealed she was cancer free!

This journey has changed their family forever but they have a strong faith in God and His purpose for their lives. The Thomas family believes their story was meant to be shared to help others and this led them to start a non-profit…thus Love Is Louder Than Cancer was founded.  Love Is Louder Than Cancer Foundation’s mission is to spread love by providing emotional and financial support to families battling cancer.